Visit the Golden Triangle of Art
The Prado Museum, one of the most important classical art museums in the world, was originally founded as a royal art collection, where you can see Diego Velázquez’s Meninas or two scandalous paintings by Francisco Goya, Maha Dressed and Naked
Thyssen-Bornemisza Museum is one of the largest private art galleries in the world, created originally by German industrialist and then Baron Heinrich Thyssen-Bornemisza and passed down. Really amazing, similar private collections of the volume and importance of works that I have seen is the collection of Shchukin and Morozov and Hasso Platner.
Queen Sofia Museum of Modern Art to see Picasso’s Guernica

Madrid’s Royal Palace with frescoes by Caravaggio and a collection of Stradivarius violins, and the Royal Gardens

Walk around the Plaza Mayor and Puerta del Sol, with Madrid’s emblematic “The Bear and the Strawberry Tree

Relax in a real oasis in the city, Retiro Park, with the lake and the possibility to go boating, sculptures, and fountains, beautiful flowers, paths … incredible landscaping! And the Crystal Palace.

Get into the rhythm of the Gran Via, a showcase of early 20th-century revival architecture with endless shopping, hotels, and chic handicapped bars.

Eat in the oldest restaurant in the world, the Botin (a Guinness World Record since it was founded in 1725), featured in many novels about Madrid, including Ernest Hemingway’s The Sun Also Rises.

Go to the Teatro Real, Madrid’s main opera house, and drink hot chocolate in one of the cafes. 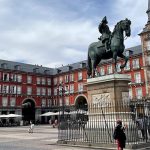