Dijon. All you need to know

Dijon is the capital of the Burgundy wine-producing region and has a splendid history, first-class gastronomy, and well-preserved architectural monuments with a mixture of styles.

The city was founded in Roman times, around the 6th century B.C., but the beginning of its “golden age” – economic and cultural prosperity – comes in the 14th century and is associated with the royal dynasty – the House of Valois. It becomes a major trading center and the capital of the Dukes of Burgundy, who used their vast wealth and power to turn Dijon into one of Europe’s great centers of science, art, and education. At that time, Dijon became a museum of Europe, as the best architects, painters, and sculptors of their time worked there. At the end of the XV century, after the annexation to France, Dijon loses its capital status and becomes a province. During the industrial boom of the mid-19th century, Dijon became a major French railroad hub and a major industrial city. Today, Dijon is the capital of the Burgundy wine region and the center of Dijon is entirely included in the list of UNESCO World Heritage Sites. 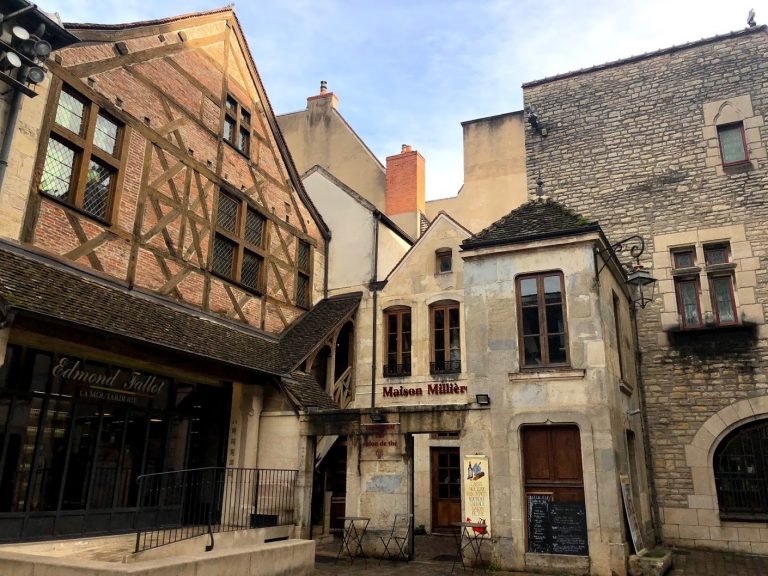 How to get there

Dijon is very conveniently located. For example, from Paris to Dijon will be most convenient to get on the high-speed train TGV, on average, only 1.5-2 hours. I advise booking train tickets through the website of SNCF.

Dijon has left a legacy of beautiful architecture and rich history to its inhabitants. You can see medieval half-timbered houses, classic mansions, or art nouveau buildings. 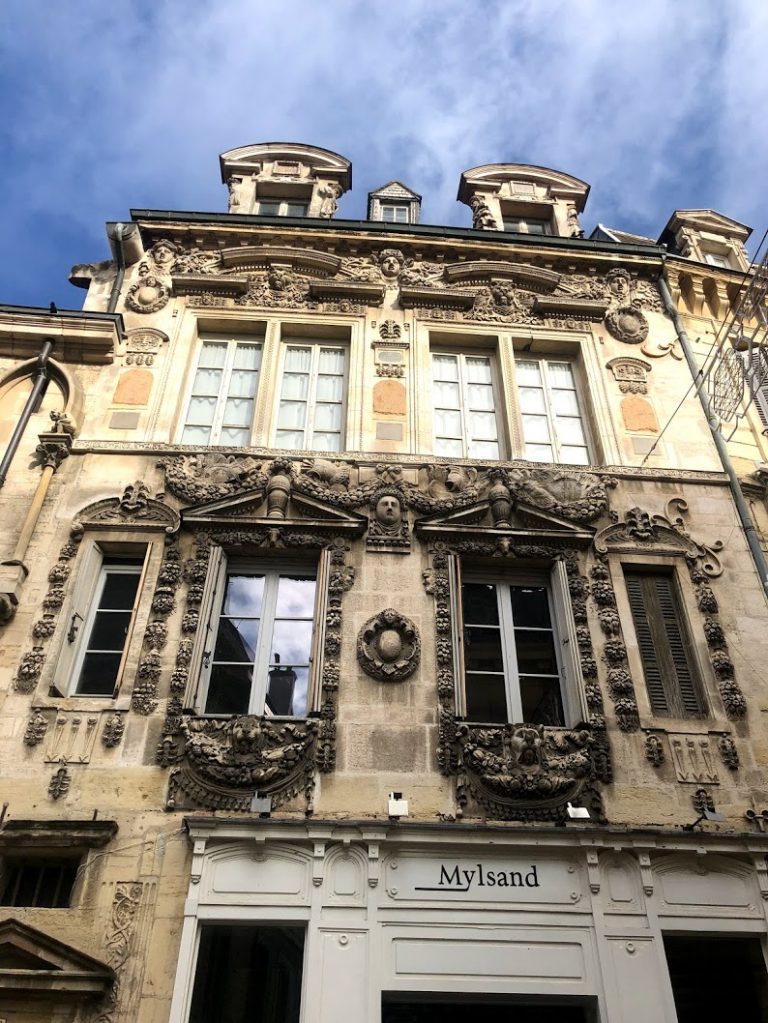 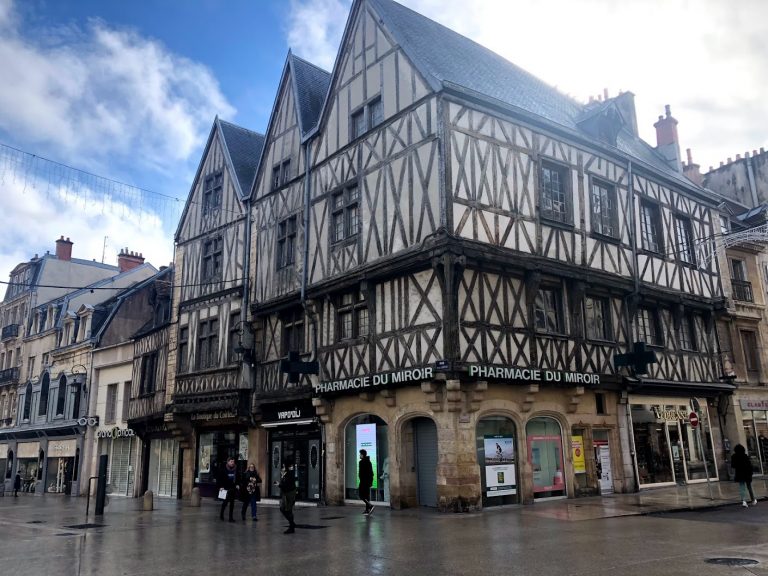 The center of Dijon is very well planned, so you can see all the sights on foot. For this there is a very original and interesting way – your guide can be an owl – the symbol of the ancient Burgundian capital.  To do this in the tourist office near the station you need to get a map of the route, with a small historical reference. Or you can simply start following the signposts with the bird’s symbol on your own. These metal arrows are located along all the walking routes, each with a number indicating the number of the landmark. In total, the walk consists of 22 points and takes an average of one and a half hours. 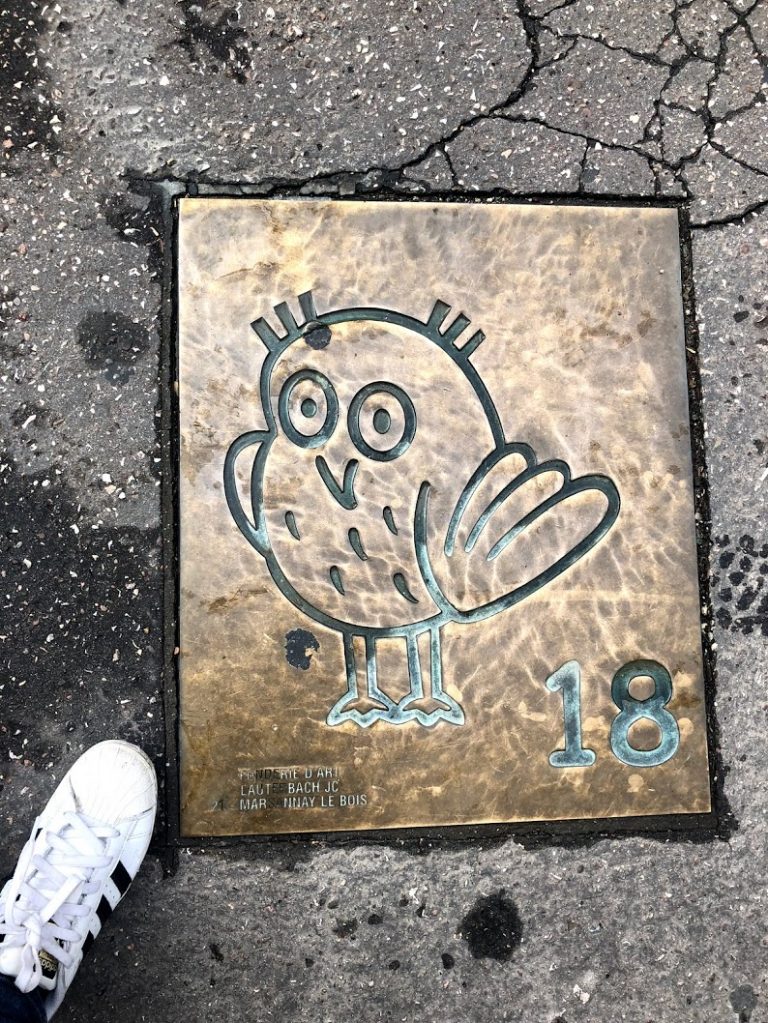 You can start with the medieval Arc de Triomphe, a gate named after Guillaume de Volpiano, famous for being the architect of the famous abbey of Mont Saint-Michel in Normandy. Nearby you can admire the Hotel La Cloche. Napoleon III, the sculptor Auguste Rodin, the composer Saint-Saëns and others used to stay here. 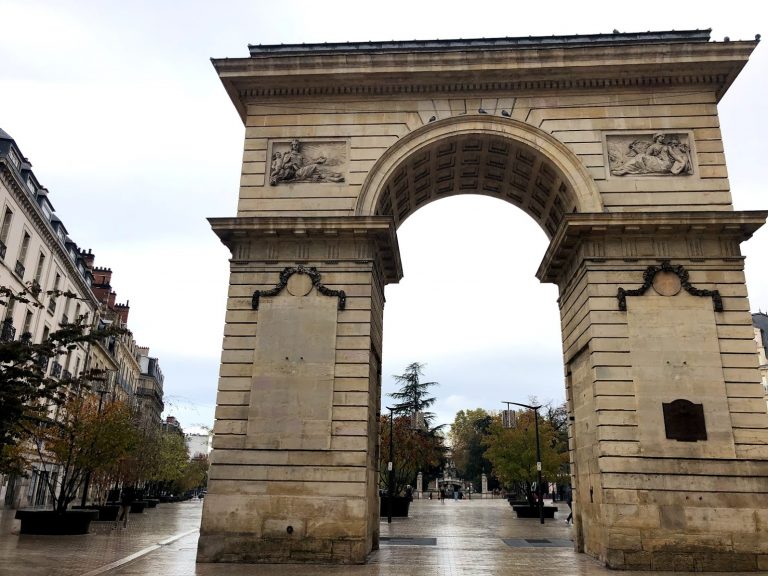 When you reach Darcy Square, you will see the 13th-century medieval church of Notre-Dame de Dijon in front of you. The first bronze owl carved into the wall of the church is also here. It is said to bring happiness and good luck to those who stroke it with their left hand. 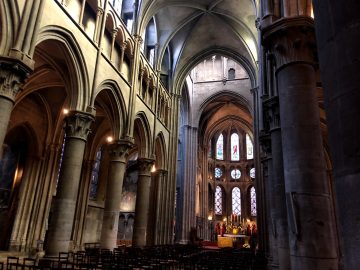 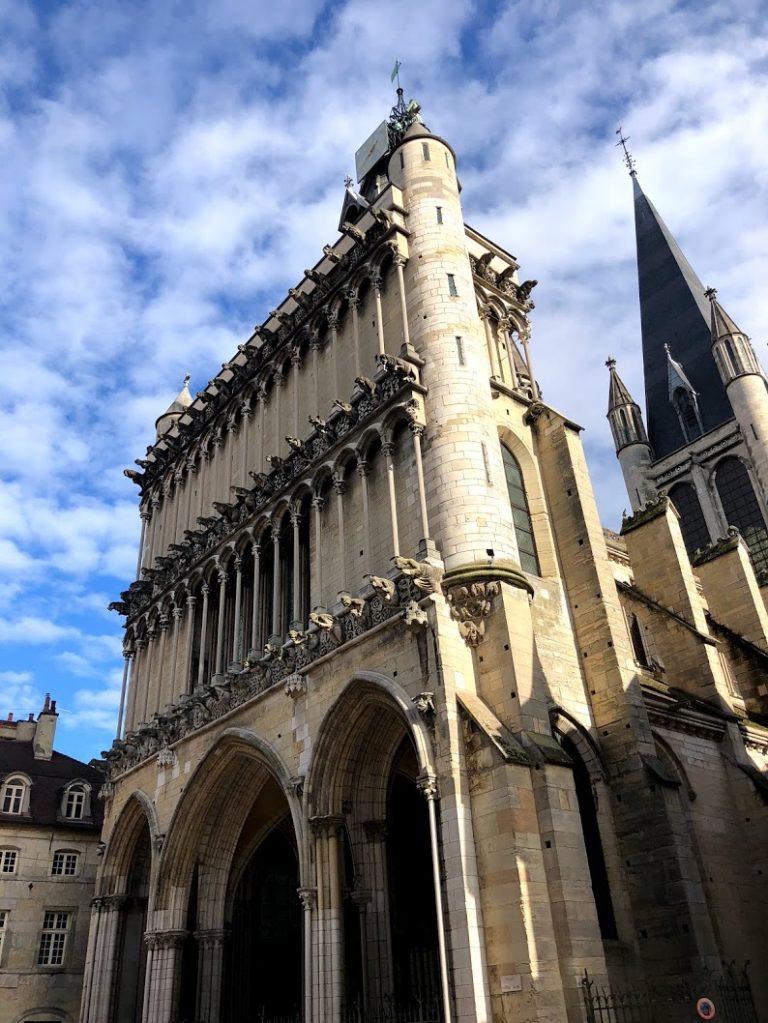 can reach one of the most Walking through the small streets of the city, you picturesque squares of the city – François Rude Square. In the middle of the square, there is a fountain with a bronze statue of a young man pressing bunches of grapes with his feet. This statue was erected in honor of the Dijon wine growers.  This square will not leave you indifferent for a few unique shots to remember. You are guaranteed to be immersed in the Middle Ages. 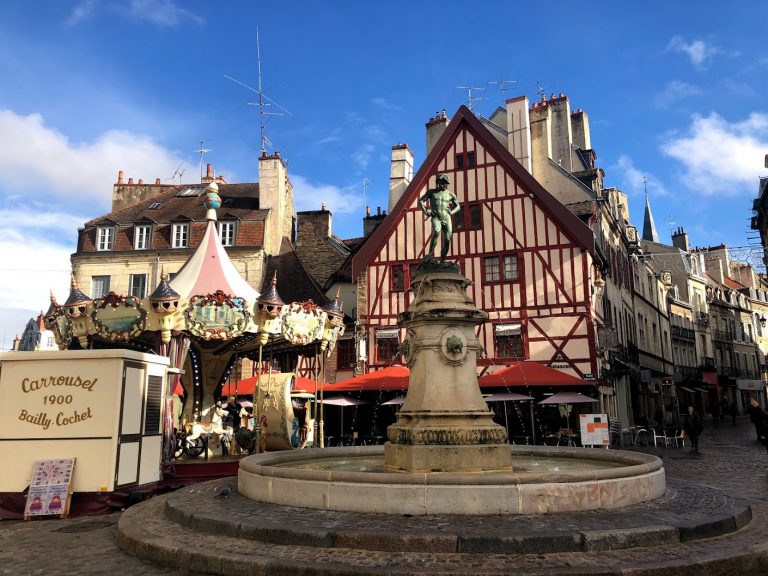 The central square of the Liberation, built-in 1686, is considered the jewel of the city. The monumental neoclassical façade of the Palais des Dukes of Burgundy, which hides many centuries of history, is in front of you. Today, the Ducal Palace of Burgundy (also called the Ducal Palace) is one of Dijon’s most famous landmarks. It was originally a fortress built in the 9th century. Then it was rebuilt by the Dukes of Burgundy branch of the Valois dynasty into a luxurious palace. First in the XIV century by Philip Le Hardy, then in the XV century by Philip the Good. The latter duke also erected the Tower of Philip the Good, which offers a fantastic view of the city from a height of 46 meters. On a clear day, you can even see all the way to Mont Blanc. 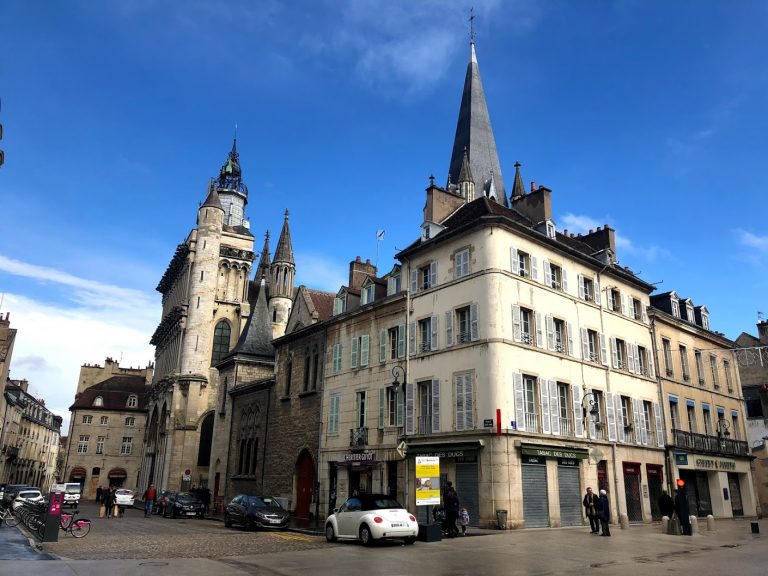 Jules Ardouin-Mansard, one of the creators of Versailles and the first architect of the “Sun King” Louis XIV rebuilt the walls of the Ducal Palace. The palace is well preserved to this day, and over time it even served as the States-General of Burgundy. It now houses the City Hall, and inside the palace, the Court of Guardians, with the tombs of Philip the Bold and his son John the Fearless, is preserved.

In its east wing is the Museum of Fine Arts. It is one of the oldest and richest museums in France, containing more than 150,000 works of art from eight periods, from Antiquity to the 21st century, and was opened after 10 years of renovation in May 2019. Here you will see paintings by Titian, Rubens, Bruegel, canvases by Claude Monet, Corbet, and Braque. 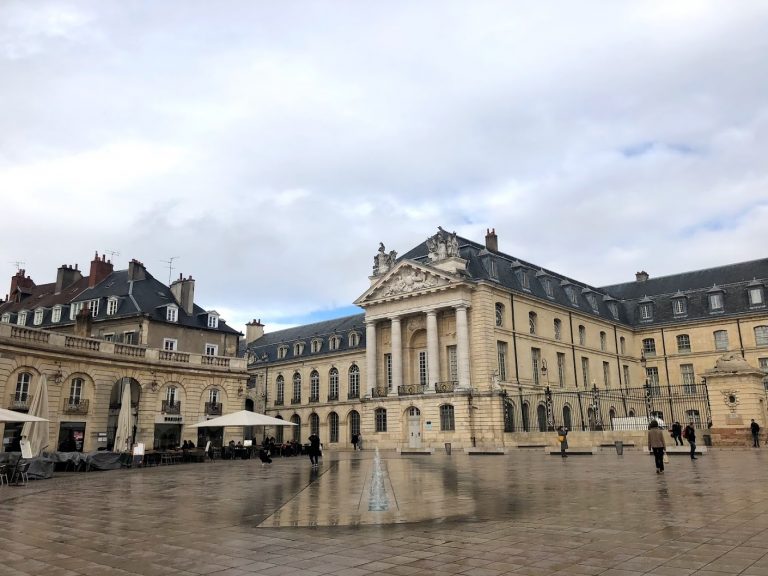 Next to Liberation Square is the Magnin Museum, a beautiful seventeenth-century mansion. It contains a collection of more than 2,000 different works of art by French, Italian, and Northern European masters from the 16th to 19th centuries. Among them is the painting “Susanna and the Elders” by Pieter Brueghel the Younger and Alessandro Allori. The museum house belonged to Maurice Magnin, a Parisian magistrate, and his sister Jeanne, an artist and art historian. Thanks to this 17th-century building, its interiors, furnishings, decorative arts, and paintings, one can get a clear idea of the aristocracy of the late 19th and early 20th centuries. In 1937, Maurice Magnin turned the house over to the state. 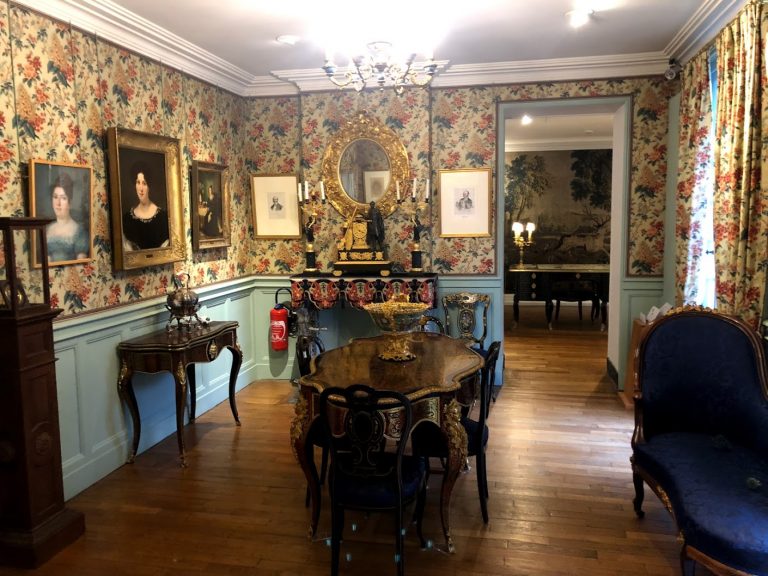 Traditional products of the city

The city of Dijon is located in Burgundy, a region famous for its first-class wines. Its “Clima” vineyards have been a UNESCO World Heritage Site since 2015. “Clima is a land of clearly demarcated vineyards which have their own history, specific characteristics (type of soil, slope, altitude, sun exposure, grape variety). which make each of these wines special. In total there are 1247 such vineyards, and their length is about 60 kilometers from Dijon to Santenay. So it is a good idea to try or buy a gift of wine in Dijon.

Another popular French drink is kir, which consists of crème de cassis blackcurrant liqueur and white wine. Sometimes white wine is substituted for champagne. This type of cocktail is called the “royal kir” (kir royal). This aperitif owes its name to the mayor of Dijon, surnamed kir. He decided to offer it at receptions for delegations of international guests. According to one version, all the local red Burgundy wine was confiscated by the German army during the war. Faced with a surplus of white wine, Cyr upgraded the drink, which had previously been made mostly from red. According to another version, the region’s regular white wine was inferior to red that year, and blackcurrant liqueur helped cover up that fact.

The city is also associated with its Dijon mustard made from finely crushed seeds with aromatic wine vinegar. There is an abundance of varieties and producers. In addition to the classic most popular Dijon mustard, there is mustard with various additives – with truffles, oranges, spices. You can visit the famous Maille boutique, one of the best mustard producers in France, which exists since 1747 and is one of 11 boutiques existing all over the world. 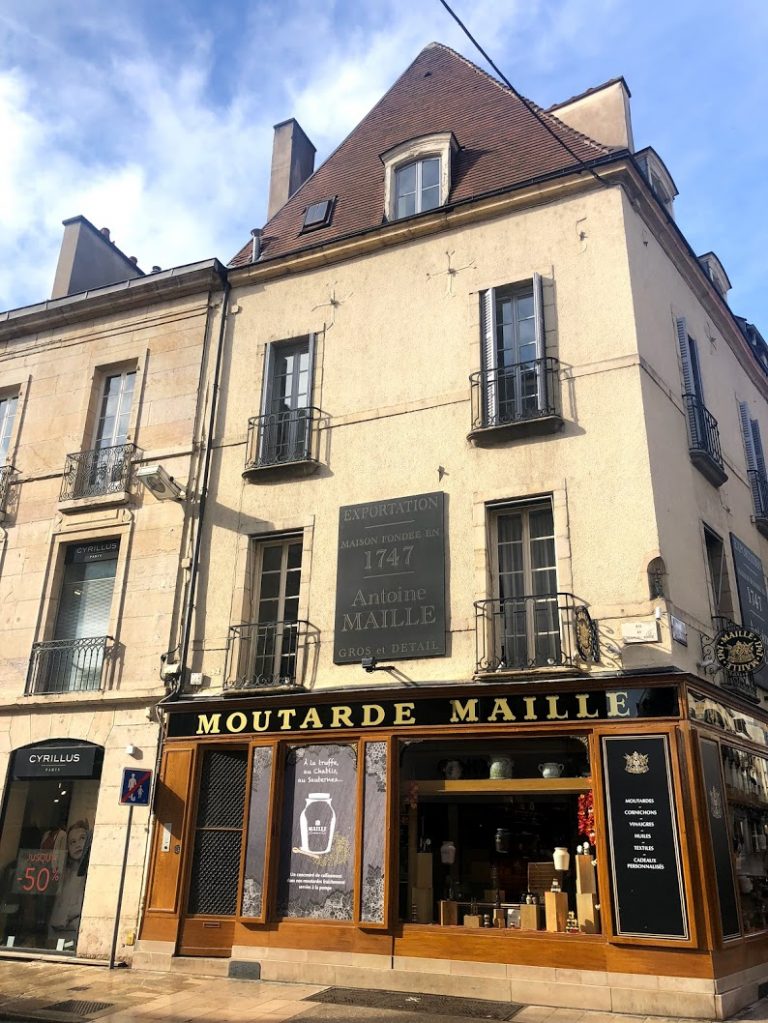 Finally, you can visit Mulot & Petitjean, the oldest factory in Dijon, which sells gingerbread bread. The tradition of gingerbread in France dates back to the Middle Ages when the Crusaders brought the recipe and necessary spices from the Middle East. In those days, spices were a means of monetary circulation, the basis for the modern French term espèces, meaning “cash money.